The attorney general is turning the Justice Department into a political weapon for the president.

By The Editorial Board

The editorial board is a group of opinion journalists whose views are informed by expertise, research, debate and certain longstanding values. It is separate from the newsroom. 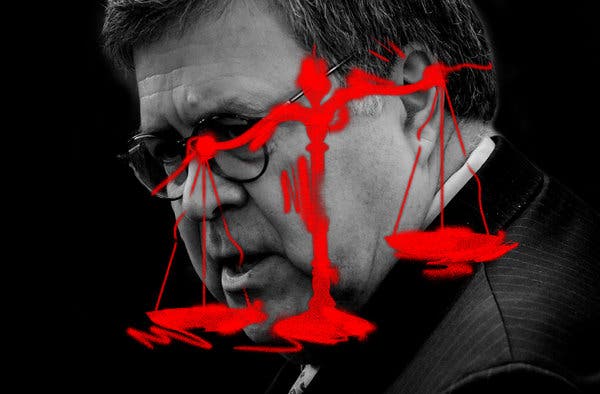 “History is written by the winners,” William Barr, the attorney general, said Thursday when asked how he thought future generations would assess his decision to drop all criminal charges against Michael Flynn, President Trump’s former national security adviser, who had pleaded guilty twice to breaking the law. “So it largely depends on who’s writing the history.”

In service to Mr. Trump, Mr. Barr is abusing his power not to write, but to erase, some of the most important lessons of American history.

The Watergate scandal, with its revelations of how dangerous a renegade White House could be, led to reforms meant to ensure an independent Justice Department, one faithful to the law rather than to the Oval Office.

The nation had seen firsthand how much harm a president with no respect for the rule of law could do — particularly when he used the Justice Department, under a compliant attorney general, to protect allies, punish adversaries and cover up wrongdoing.

Among the key reforms were stronger transparency and ethics rules, like the creation of independent inspectors general to root out waste, fraud and abuse in the executive branch. (Mr. Trump has been firing inspectors general he thinks are not loyal to him.) There were also new limits on presidential power, like the Congressional Budget and Impoundment Control Act. (President Trump broke that law last year, according to the nonpartisan Government Accountability Office, when he withheld hundreds of millions of dollars in military aid to Ukraine.)

To Mr. Barr, these reforms were obstacles to a vision of a virtually unbound executive. For decades, he has pushed to give presidents — Republican presidents, anyway — maximum authority with minimal oversight. In a 2018 memo criticizing the Russia investigation, he argued that the president “alone is the Executive branch,” in whom “the Constitution vests all Federal law enforcement power, and hence prosecutorial discretion.” For the attorney general, that discretion includes cases involving the president’s own conduct.

If you’re having trouble distinguishing Mr. Barr’s vision of the presidency from the rule of a king, you’re not alone. “George III would have loved it,” said Douglas Kmiec, who led the Justice Department’s Office of Legal Counsel under Presidents Ronald Reagan and George H.W. Bush.

“Bill Barr’s America is not a place that anyone, including Trump voters, should want to go,” wrote Donald Ayer, who served as deputy attorney general under the first President Bush. “It is a banana republic where all are subject to the whims of a dictatorial president and his henchmen.”

Bill Barr’s America is the one we’re now living in. The Justice Department, in the midst of a presidential campaign, has become a political weapon.

Having absorbed the lessons of Watergate, mainstream Republicans once balked at the politicization of the Justice Department — even by Republican presidents. When President George W. Bush’s attorney general Alberto Gonzales fired eight United States attorneys because they were not aggressive enough in prosecuting Democrats, the outrage was bipartisan, and he was forced to resign.

But today’s Republicans, who could be most effective in defending the integrity of American justice, appear either too afraid of Mr. Trump or too eager for short-term partisan advantage to confront the danger to the country.

Mr. Barr’s decision to drop the charges against Mr. Flynn may be his most egregious abandonment of his role as the public’s lawyer, but it’s certainly not the first. Last year, barely a month after he was confirmed to his post, he stood before the American people and misrepresented the contents of the long-awaited report by Robert Mueller, the special counsel who investigated ties between the Trump campaign and the Russian government in 2016.

The report itself, at 448 pages, documented extensive evidence of those ties, as well as multiple instances of lying and obstruction of justice by Mr. Trump and other top government officials. Mr. Barr’s four-page summary claimed the opposite — that Mr. Mueller had found no collusion or obstruction of justice. Mr. Mueller protested, and yet weeks passed before Americans could see the report themselves and discover just how much Mr. Barr had twisted its findings to benefit Mr. Trump.

In March, a federal judge called Mr. Barr’s characterization of the report “distorted” and “misleading,” and said his “lack of candor” called his credibility into doubt.

But Mr. Barr didn’t stop there. He also rejected a report by the Justice Department inspector general finding that there was sufficient evidence to open the Russia investigation. He referred to the investigation as “spying” and ordered a criminal inquiry into its origins. He intervened in the prosecutions of two of Mr. Trump’s top advisers, Mr. Flynn and Roger Stone, for whom he recommended a lighter sentence than his own prosecutors had sought. And he declined to open a criminal investigation into last fall’s whistle-blower complaint against Mr. Trump, saying it did not qualify as an “urgent concern.” The complaint ultimately led to Mr. Trump’s impeachment.

Last month, Mr. Barr went on Fox News and called the Russia investigation “one of the greatest travesties in American history,” and said, “We’re not dealing with just mistakes or sloppiness, there was something far more troubling here; and we’re going to get to the bottom of it.”

With these remarks, Mr. Barr appears to have violated Justice Department policy against publicly discussing current investigations. His insistent attempts to undermine the legitimacy of the Russia investigation and absolve Mr. Trump of any wrongdoing also appear to violate department policy against taking any actions that could be seen to have a partisan political purpose, especially in an election year.

The damage Mr. Barr is doing extends beyond policy violations. He has weakened the morale of the department by undercutting career prosecutors — men and women who devoted their lives to the rule of law. Four of them quit the case against Mr. Stone, who was convicted of federal crimes including perjury, wire fraud and witness intimidation, when Mr. Barr intervened to ask for a lighter sentence. Another quit the case against Michael Flynn shortly before the department filed its request with the court to drop all charges.

President Trump couldn’t be more pleased. He has shown little sense of the law, other than that whatever it is, he must be above it. He has never given the slightest hint he thinks the Justice Department exists for a reason other than to protect his interests. And no wonder, since he took his cues from President Richard Nixon himself. “I learned a lot from Richard Nixon, don’t fire people,” Mr. Trump said on Thursday. “I learned a lot. I study history.” One of the most important lessons? “He had tapes all over the place. I wasn’t guilty, I did nothing wrong. And there are no tapes.”

Together, the president and his attorney general appear to be laying the groundwork to use the Justice Department against Mr. Trump’s primary political opponent — Joe Biden, the presumptive Democratic nominee for president.

A fabulist narrative is taking shape before our eyes, in the shape of multiple investigations Mr. Barr has ordered. He is pursuing the theory that under President Obama and Vice President Biden, a corrupt Justice Department and out-of-control F.B.I. schemed to keep Mr. Trump from winning the White House by opening a sham investigation into his ties to Russia. This is the upside-down version of reality, of course. In fact, even though the F.B.I. had plenty of reason to open the investigation, it refused to acknowledge its existence until after the election.

Mr. Barr and Mr. Trump have made their intentions clear. “We’re going to get to the bottom of what happened,” Mr. Barr said Thursday.

“These are dirty politicians and dirty cops and some horrible people, and hopefully they’re going to pay a price some day in the not too distant future,” Mr. Trump said in his Fox News interview
Friday.

Democratic self-government is premised on the expectation that the people’s representatives will not wield the immense powers of law enforcement for their own personal ends, without oversight by the other branches. The nation’s founders did not wage a war for independence from a tyrant who considered himself to embody the law so that the republic would tolerate another executive who considers himself above the law.